It snowed…in London! I’m convinced this never happens, but on Monday night it blooming well did!
I’d been complaining about a headache in the office on Monday afternoon, and threw out a comment that I only ever get headaches like that when there’s going to be a storm…so now my colleague is totally convinced I’m psychic. Before I get taken away for scientific analysis, here’s my recipe for a tartiflette inspired bake that’s going to bring a bit of a ski lodge vibe to your weeknight supper.
It’s so easy (I’ve called it lazy) because there’s no par boiling of the potatoes, or even slicing them, and the bacon goes in raw so there’s no frying either!

500g of baby new potatoes (I used a mixture of red and white ones but any are fine)
250g baby carrots
6 baby onions or small round shallots
2 garlic cloves, unpeeled
25g butter
200g smoked bacon lardons
2 tablespoons of white wine, plus more for drinking if you like, and if you’re old enough of course!
150g – 200g reblochon cheese, sliced
2 tablespoons of crème fraîche

1. Preheat your oven to 200°c. Peel the baby onions and trim off any roots. Pop them in a large oven proof dish with the potatoes, carrots, garlic cloves, and butter then scatter over the bacon lardons.

2. Bake for 50 minutes to 1 hour, stirring occasionally during cooking (oh and if the potatoes start to whistle prick them with a sharp knife, I was a bit worried mine were going to explode so keep an ear out)

3.  When the bacon is cooked and starting to crisp up and the potatoes are tender and it’s all looking generally ace, take the dish out of the oven and with the back of a fork gently crush some of the potatoes. You just want to flatten them a little bit, don’t totally mash them. Now pour over the white wine and season well with black pepper and a pinch of salt. Next lay the sliced reblochon cheese on top and return it to the oven for another 5 or 6 minutes to allow the cheese to melt, and that’s pretty much it.

4. When the tartiflette is ready, add a dollop of crème fraîche and the chopped tarragon. Serve with chunks of warm baguette, put on your slipper socks and relax. 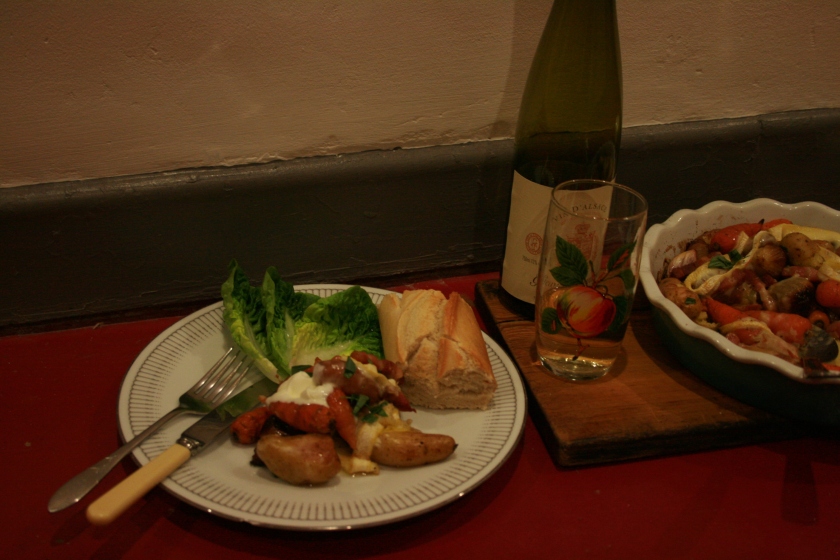 Cooking Without a Kitchen